I am home for Christmas, way, way out in the country, where adventures are difficult to come by unless I was to borrow either the megatruck or the megatractor to go tens of miles into town – where there still would be little new to do.  Dad offered to let me castrate a calf, but this vegetarian refused.  I have pretty much done everything else possible on the farm/ranch over the years though, such as:  built fence, clipped duck wings, wormed goats and trimmed their hooves, helped round up lost cows, harvested apples and pears, made preserves, and walked in the fields at midnight to admire the stars.

But I had a memory from when I was a tween or so, of my dad making candles.  He hasn’t done it since, so I suggested that we do that together.  Dad had to mentally shift gears from being a rancher trying to get a barn rebuilt, to someone who could actually pause and catch his breath.  But when we started digging out the old candle-making equipment, he started to get really excited, as did I.  Mom also has made candles, which I didn’t know about, but she encouraged my father and I to do this just the two of us.  (Of course, we asked her for advice on how to do this, which she gamely gave). So here is the action!  The picture of the final candles will be added tomorrow, as they have to cool overnight.

Dad and the candle-making works in the kitchen of our old cabin.

Apparently something my mother had done – a pine cone dipped multiple times that we found in the cabinet.

We’re all crafty. Mom in the newly converted old garage off of the cabin – now her basket/wreath ‘shop.’

Dad, and a three-wick candle he had created umpteen years ago that he just found in the cabinet.

See – umpteen years ago. (This newspaper forms the base of the box of scents my parents put together when they first started.)

Dad fixing up the wick for his candle and plugging the hole at the bottom with clay.

Stringing the wick through my mold.

Melting the wax in a hot pan of water. Started adding the dye.

My first pour – to secure the base in the candle, and to ensure the mold isn’t leaking.

My freshly poured candle, reflecting the cabinet above.

Some of the scents my parents had.

My various projects. The square candle (a holiday red) is cooling, and I am about to pour a yellow/orange crystallized candle.

Initial mix of my jasmine/cinnamon candle.

Letting it cool a little, so that some crystals I added will remain suspended while pouring. (ha! easier said than done).

Dad’s candle looking all wonky as it dries and shrinks. They do that, and one has to poke a hole down the center, then pour in another round of wax to fill in any air pockets, and top it off to a smooth surface.

Dad topping off his candle

Little votive candles that I made with extra wax. (Pictures of the big ones tomorrow, after they cool overnight.)

The chickens waiting for us at the front door of the house when we returned. Boy, it looks country, doesn’t it?

And here is the final candle, one of them anyway. 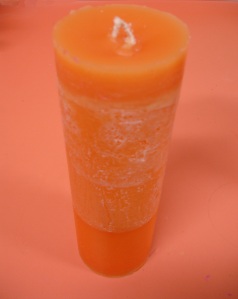 This turned out nice, although the jasmine/cinnamon scent is a potent combination.  You can see that the middle part of the candle has more of a crystallized effect, that’s where I added a more congealed wax, so that the crystals wouldn’t sink.  Look at me sounding all professional.  But one could really experiment here….

And I think this may be the last adventure for 2014.  We’ll see if I can squeeze in another one, so stay tuned.

P.S.  I just came across this website of candle-making terms, which gives a hint for how complicated candle-making can get: http://www.candlecauldron.com/dictionary.html.

2 thoughts on “Candlemaking with my Dad”

Reflection, in Honor of Plastic-Free July. This is a waste basket, the kind made out of waste. The broken base of it came from the free box of a garage sale last Saturday. The plastic ribbons are single-use plastic packaging used to ship construction materials: three of the four colors picked up off the floor … END_OF_DOCUMENT_TOKEN_TO_BE_REPLACED

Tiny houses have been around for as long as humans have sought shelter, but lately they are becoming a more popular[1] choice in housing internationally, offering alternatives for people who want their own house but, for a variety of reasons, don’t want a traditional, single-family home.

“….The roadmap to improving perceptions of conservation starts with reminding individuals that their neighbors care about it.”

By Anshika S. and Annette Olson Known as Public Consultation in the British Commonwealth and in European nations, and often as Public Testimony and/or Commenting in the United States (U.S.), governments around the world that have forms of free speech have processes for seeking public inputs on laws, regulations, and other forms of policy. Climate … END_OF_DOCUMENT_TOKEN_TO_BE_REPLACED

Now and Next This is the last chapter in the story of three sharp engineers, who decided to make a difference – and write childrens’ books.  Read the first two episodes if you haven’t yet:  …Chapter 1: the story of why [link] and Chapter 2: the how’s of planning children’s books and learning to rhyme … END_OF_DOCUMENT_TOKEN_TO_BE_REPLACED