I seem to be losing some steam here, as this week snuck up on me, and then I wound up doing something new that wasn’t that hard.  Well, two new things.

First, thanks to my friend Laurie, who unfortunately couldn’t make it, I wound up with tickets to see the author David Mitchell (Cloud Atlas) speak at Sixth and I Synagogue.  I’ve been to book signings before, so that didn’t count, but it was the first time I have ever been inside a synagogue. (I’ve been to a number of Jewish weddings – but they were all outdoors).  But as there was no service involved, I don’t think this should count.  The Sixth and I Synagogue is beautiful, though, and David Mitchell was great fun.

But this blog is about going to my first DC VegFest – you guessed it, a food festival for vegetarians.  My New Year’s Resolution blog is supposed to get me out of my comfort zone, and here I was – out of time and ideas for the weekend – headed to a festival of comfort food among fellow vegetarians.  Not really a stretch, but it technically was something new, and perhaps even adventuresome.

So at this VegFest, I anticipated new restaurants and foods to try, as the Washington Post (WP) had put this as one of the top 7 things to do for the weekend.  Also, as around 5% in DC are vegetarian/vegan (I need a more recent study), there are many vegetarian restaurants, and almost all restaurants in DC have vegetarian options (see a great WP article here about exploring this).

Unfortunately, the festival was lacking on great restaurants and great food discoveries.  How could this be?  This vegetarian never suffers food-wise in her day-to-day life (except when out-of-state).  I have been to many excellent restaurants and had excellent meals.  However:

a) only a few of the great standards were there: Woodlands Bistro’s food truck, Pete’s A Pizza, Sticky Fingers. I avoided them, as they are all in walking distance from my house anyway.  No well-known/high-end restaurants were present that I saw except for the famous bakery Vegan Treats from Pennsylvania.

b) the emphasis was on vegan, not vegetarian, which is admittedly trickier.

c) most of the booths were not food related.  Many were needed, such as those about hunger, animal welfare, etc…, but many were about vegan soaps, lotions, protein powders at $69 a bag, etc… Here is a great long list of participants.  But I was there for the food.

d) the lines at the places I wanted to try or heard were good were very long.

The line for Vegan Treats goes way back there.

I did try some cool new things like cultured cashew nut “cheese” (forgot who that was).  But about half of the food I tasted was not my ‘flavor.’  And I’m sorry, but how many $10 per bottle kale-pineapple juice stands can there be?

So I was rather disappointed in there not being more restaurants, especially some of the higher end or more mainstream ones in DC.  But I ran out of stomach space and couldn’t try a number of stands, so maybe I’m not giving the festival a fare shake.

In the end – it was still a new adventure.  A new festival with new foods, definitely.   It was great seeing the thousands of people there, as being meat-free is a good thing.  (I won’t go into why here, as there are so many reasons.)   I am grateful there is such a thing as a Veg Fest! 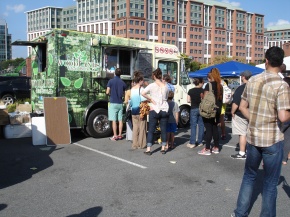 Have a good evening – and a good meal.

One thought on “The Festival of Vegetarians”

Now and Next This is the last chapter in the story of three sharp engineers, who decided to make a difference – and write childrens’ books.  Read the first two episodes if you haven’t yet:  …Chapter 1: the story of why [link] and Chapter 2: the how’s of planning children’s books and learning to rhyme … END_OF_DOCUMENT_TOKEN_TO_BE_REPLACED

Research and Rhyming This is the continuation of an interview with three great people, all submarine engineers, who you can get to know in Chapter 1. [link] You three guys have three planned children’s books being developed for hardcopy but already available in audio, with Nick recording and reading most of the parts for the … END_OF_DOCUMENT_TOKEN_TO_BE_REPLACED

Earlier this week, Facebook named myself as a “Leading Lady” in the “Hall of Her” because of my work creating and building Climate Steps. Whoop! With a focus on Women’s History Month, and International Women’s Day (March 8th), Facebook wanted a woman-founded climate change site. And they picked Climate Steps – looking first for a … END_OF_DOCUMENT_TOKEN_TO_BE_REPLACED

The Three Submarine Engineers: What triggered three Brits to take a very unusual step: Submarine engineers to children’s books authors about the environment? Join us for the fun.