Twenty-two years in DC, and I have never been to the National Aquarium in Baltimore, Maryland – a hour or two drive.  Friends have looked surprised whenever I mentioned that, but I just never get up there.  So my friend Amy and I did a mini-road trip up yesterday to help meet my weekly adventure.

If you are curious how this makes a new activity, because surely I’ve been to aquariums before (yes, including the National Aquarium in the basement of the Commerce Building in DC before it was shut down), Amy looked into behind-the-scenes-tours and found a shark-immersion tour.  Amy also likes adventures, it seems. 😉  Not that we actually were immersed with sharks per se – but we did get to hang out on the catwalk above their tank, and see the food prep area, the vet lab, etc.  Unfortunately, I don’t have a good picture of a shark, because the light levels were too low.  Just of the catwalk. 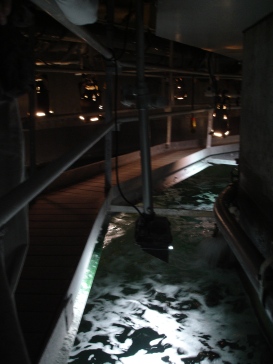 Some other behind the scenes at the National Aquarium shots…

Tags used to tag sharks in the wild

Amy and I also, of course, wandered through other exhibits.  My least favorite was the put-the-dolphins-ability-to-do-tricks-on-display area, which seemed too small for such intelligent animals, and except for a few toys, had nothing in their tank to stimulate their minds.

I am sure they are put through daily enrichment exercises, but still, the shark tank appeared larger and was definitely more interactive than the dolphin tank.  I had heard several weeks ago that the aquarium was considering moving their dolphins to an oceanside sanctuary, but I saw no signage about it at the aquarium, and there is nothing on their website about it.  Coming back to DC, I doublechecked, and I couldn’t find the original article, but here are several that discuss it: Al Jazeera, National Geographic, E&E Publishing.  So the aquarium does seem to be truly considering it. There’s a lot to consider, as seven of the eight dolphins were born in captivity, so they can’t just be released in the wild. They have to go to an intermediate environment, and I’m glad to hear the aquarium is sincere in trying to improve their conditions.  As a biologist who studied animal behavior, I have read a number of scientific research articles about how they communicate (many are based on studies in captive situations like this) and dolphins are just flat out incredible. They need a better environment.

Anyway, moving on through the tour….my favorite part was the jellyfish section (no brains to worry about there).   Beautiful displays…

Volunteer, certified divers come in to help feed the fish.

Not sure which species this is, and not clear from the aquarium’s website.

The aquarium is helping plant grasses to help remove chromium from the water – as right now the harbor is too contaminated for either folks to swim in, or for the aquarium to use the water for their tanks.

Humphead Wrasse, Cheilinus undulatus. It likes to invert its lips when blowing food out of corals. Also apparently immune to the toxins of the crown-of-thorns starfish.

This is cool. A green wall of plants on a hotel near the aquarium. Photo by Amy Copeland.

And then there’s one of the way coolest things I’ve seen, a remote-controlled helium shark.  Maybe one has to be a Dr. Who fan to get this (Christmas Special 2010 – video of flying shark here) but it is so cool to see a shark swim through air.  Weird, neat, and quite scary to the little kids, and pretty realistic movement too.  Nephews – you may just get this for Xmas, unless I keep it for myself.  One does have to fill it with helium whenever you want to run it.  But imagine next Halloween, kids come up to the porch, and a shark starts to descend….  (made for indoor use only…).

One thought on “Sharks at the National Aquarium”

The Paris Agreement, the USA, and You

It is during such times that we realize the power individuals hold towards determining the future of the world.

A Tool Library Is a Seed

or How Collaborative Communities Can Reduce Global Warming….

According to the United Nations, the climate crisis has become the defining issue of our generation. With the legislative and executive branches of states around the world failing to act, however, the judicial branch often remains the last resort to address the growing human rights and environmental crises. Learn more on how you can take … END_OF_DOCUMENT_TOKEN_TO_BE_REPLACED

“….this past winter the ground never froze, so we have a banner year for destructive insects…”

Wind up Plastic-Free July by spending some time with us learning what is plastic, its impacts – good and bad – including on climate change, and how to fight plastic pollution throughout the year. Dr. Annette Olson, Founder of Climate Steps and the Lead for Green Neighbors DC, and guest Den Fusso, plastic activist, will … END_OF_DOCUMENT_TOKEN_TO_BE_REPLACED

where observation and imagination meet nature in poetry

Climate breakdown threatens our future. There are solutions, but it will take millions of us to set them in motion.

A New Zealander living in Scotland who loves cargo bikes